A House on the Edge of Forever: Discovering and Documenting the Occult History under our Feet.

I officially began my stint as a paranormal researcher and writer a couple years ago, while investigating a local Salt Lake City legend—a curious gravestone inscription at the sublime Salt Lake City Cemetery. My photo of Lilly E. Gray’s stone, which reads "Victim of the Beast 666", was featured in the reader photos section of Coast to Coast’s website, and I received hundreds of responses and ideas about it.

The majority of the responses were in just a couple categories; those who thought there was a numerology connection (there’s not) those that scolded me and informed me a nice girl shouldn’t be messing around with "demonic" things, and those that suggested "The Beast 666" may refer to Aleister Crowley. Being only vaguely familiar with Crowley, I dismissed the notion as too convenient and fantastic.

I changed my mind after reading all readily available biographies. I began working on an article making a case for Crowley actually being the "beast" behind the stone. In searching for anything that would remotely tie Aleister Crowley to Salt Lake City where he could have met Lilly, I came across something. It seems his secretary, Israel Regardie, met Albert Reidel (Frater Albertus) in California, and was so intrigued and impressed by the promise of modern alchemy, that he hightailed it to Reidel’s Paracelsus Research Society in—of all places—right here in Salt Lake.

Albert Reidel and his institute were arguably the most important, and well respected influences in modern alchemy. Many of today’s preeminent laboratory alchemists studied in Salt Lake City with Reidel, including Robert Allen Bartlett. In a paper called The History of Alchemy in America, Mark Stavish writes,

"At the Paracelus Research Society…Frater Albertus conducted classes on plant, mineral, metallic, and animal alchemy.  In the beginning , classes lasted for three two-week sessions, and were later expanded for a period of seven years…In addition, Qabalah, and specialized applications of astrology were taught.  Among his students were …George Fenzke, Hans Nintzel, who was sent there by Israel Regardie…and Art Kunkin, editor and founder of the L.A. Free Press, and inheritor of Regardie's library…For over a quarter of a century, Albertus initiated hundreds of students into the modern practices of alchemy.  Over 600 by one estimate attended his classes."

This is obviously a pretty major thing within an admittedly very esoteric community of modern practical alchemy. I would think though, that an occult-oriented, publicly registered business that recruited for members via pamphlets and the like—it does not seem to have been a shady, secretive cabal at all—would have spawned some kind of local legends, some level of notoriety. Especially in Salt Lake City, a notoriously, single-minded religious place. But, there’s nothing.

Upon discovering the information about the Paracelsus Research Society, I figured I hadn’t stumbled upon it before simply out of coincidental oversight, as I have been reading about Utah folklore and curiosities for years. I thought mentioning it to a few friends very interested and knowledgeable about Utah history would bring some stories or nods of recognition, but all I received were puzzled looks and requests for more information.

Searching the internet, I found some pages that have some transcriptions—the institute’s newsletters and some other ephemera. I felt a need to locate the building itself. Alas, the address was omitted in every piece of correspondence; only a P.O. box was listed.

But, I was so excited to find a pamphlet in these scanned documents that boasted some photographs of the institute itself! There was even a great, full-on frontal view of it. But what was I going to do—obsessively drive around the city looking for a non-descript, very cookie-cutter house? 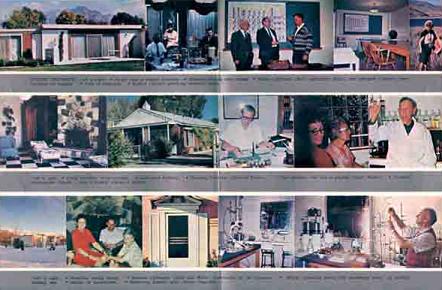 I posted the pamphlet photos on flickr, and one of my resourceful friends found some old business listings for the institute, and it listed its street address. Intrigued herself, she drove out that day and snapped some shots of the house at the address. It looks to be a bail bonds type business, with some attached rental-residential areas in the back.

The chances of the current inhabitants knowing about the rich history of their now-crummy and run-down rentals seem slim. The difficulty of finding any information about the location, the apparently complete lack of standing oral histories of the Paracelsus Research Society, and general transient vibe of the area, make me wonder if the real question is: would anyone care?

Could this huge gooey nugget of occult history have gotten ‘lost’ in the first place because of the marginal subject matter—alchemy-- itself?

For those of us who do care, we can document our discoveries in our blogs and articles, in a hope to provide a makeshift ‘oral’ history, that may be used now or later to tell a more complete local history. In the case of the Paracelsus Research Society, the idea of the ultimate alchemical/spiritual quest for ‘gold’ fits perfectly into the Utah/Mormon mythos.

There are the famous gold plates from which the Book of Mormon was said to be translated, Joseph Smith’s controversial status as a "gold-digging" opportunist, the Gold Rush itself and the flock to the West, the legend of the Koyle Dream Mine (said to house an unimaginable wealth of gold), and the legend of the lost Rhoades Mine, said to be the source of the gold used to fashion the Angel Moroni that stands atop the Salt Lake temple.

Occult history seems to be under-appreciated and quite overlooked within the mainstream, and it may take our DIY efforts to discover and preserve it. This kind of thing may be the ‘job’ of historical and preservation societies, but we may be more effective and vital in this realm because of our personal interests and inspirations.

The History of Alchemy in America, Mark Stavish