Wednesday has come again, signaling the return of that most infamous of paranormal reviews many call, Ghost Files. This is a very special edition, as the ‘Files will now be expanding to cover all aspects of the paranormal. No longer will you be subjected to ghost stories, alone—now you can expect all varieties of topics, including UFO-logy, crypto-zoology, conspiracy, and much more. But fear not, spook-fans, there will still be plenty of ghostly material to quench your thirst.

This week, I present to you an in-depth article on recent Coast to Coast AM guest, Thomas Biscardi,” and his 24/7 Bigfoot cam. Plus, I’ve got a possible real-life dragon photo and an article on a certain celebrity family’s adventures with the Ouija Board.

Sit back, and enjoy—Ghost Files cometh…

Are you interested in the search for Bigfoot, but aren’t an avid outdoorsman? Or maybe the frightening prospect of actually finding the elusive Sasquatch keeps you at home. Now, thanks to Crypto-zoologist Thomas Biscardi, you can watch for Bigfoot in the comfort of your living room.

"Now the whole world can watch us try to track down and study the elusive creature known as Bigfoot," according to C. Thomas Biscardi, leader of the expedition and founder of the Great American Bigfoot Research Organization.

The expedition, which has already been investigating multiple Bigfoot sightings since the spring thaw, has located an area in which they expect to find at least two resident Bigfoot, according to Tom Biscardi. The area is near Happy Camp, California and they will begin offering live streaming video of their expedition beginning August 6th on a 24-hour-a-day pay-per-view webcast…

For $14.95 per 7 days, you can watch a constant stream that, at the very least, will provide you with a terrific insight into a scientific expedition. And, hopefully, you can be among the first in the world to see the mystical beast.

I found the mentioning of Coast to Coast AM in the article to be rather funny. It states that after Tom Biscardi’s appearance, his and other Bigfoot-related sites crashed due to over 1 million hits. For regular Coast listeners, we know far too well the power of mentioning a website on the air.

Bigfoot ranks amongst my most cherished of paranormal topics. Although I’m hopeful this expedition will be successful, I don’t see any significant advantages that will prove useful this time around. Nevertheless, I’m confident in Biscardi’s enthusiasm, and I would be glad to see some new evidence if a full specimen cannot be obtained.

While I won’t be signing up, I’d love to hear from anyone who does. As always, you can contact me at

Another ‘As heard on Coast to Coast AM,’ this article (and accompanying image) seemed too fantastical to pass-up.

Dragons in the Tibet Sky

A photo of two peculiar dragon-shaped objects taken from a plane flying over Tibet’s Himalayas piqued many users’ interest when displayed on a Chinese website. The photographer is an amateur.

On June 22, 2004, the photographer went to Tibet’s Amdo region to attend the Qinghai-to-Xizang Railroad laying ceremony, and then took a plane from Lhasa to fly back inland. When flying over the Himalaya’s, he accidentally caught these two "dragons" in a picture that he took. He called these two objects "the Tibet dragons." 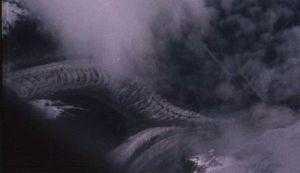 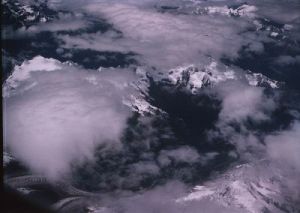 I’ve studied the image at great length and, as much as I want to believe it to be true, it looks like an optical illusion.

This may seem like clear-cut evidence of the existence of dragons, but after further examination, I think what we see here is simply an optical illusion. It looks to me like the tail sections are mountain ridges, and the foot nothing more than snow.

Real or not, it’s still a great photograph. This could be the Nessy-hand-sticking-out-of-water photo of the 21st century.

With the release of her supernatural-thriller, “The Skelton Key,” rapidly approaching, actress Kate Hudson is telling-all on her dealings with the paranormal.

KATE HUDSON's new supernatural movie SKELETON KEY was familiar territory for the actress because she grew up summoning the dead using Ouija boards.

She says, "I have tons of memories of the Ouija board. I've done it with my boyfriends, girlfriends and my family.

I had no idea Kurt Russell was big into the paranormal. One would think that being such a “good conduit,” as Kate Hudson puts it, it would have steered him away from the Paul WS Anderson stinker, “Soldier.”

All joking aside, at least Russell still has “The Thing” to be remembered in. Only time will tell if the spooky, “The Skeleton Key,” will be successful.

That’s all for this special, expanded version of Ghost Files. I hope you enjoyed the change from ghost-only content. As always, I’m open to suggestions and comments at

Like what you read? You can traverse the information super-highway to

Thank you all for your kind words and support. This is Khyron, signing off.