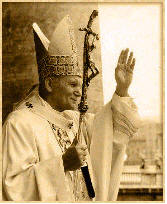 With the weekend's breaking news, we cannot guarantee the "Round by Round" Coverage of the Velikovsky Debate, though we hope to still have it by sometime Sunday, if not it will be postponed until next weekend. In the meantime, we pause to remember Pope John Paul II, who died on Saturday.

Given that it is a position as old as the Church itself, it should come as no surprise that the Papacy is a constant thread that runs through most every conspiracy theory. Every major event of human record for the last 2 millenia has had some potential tie-in to the Vatican. Whether it be the JFK assassination, the various European wars of conquest, or the mysterious observatory owned by the Vatican, the Papacy and conspiracy theory are indellibly linked.

Seemingly also indellibly linked are the world of psychics and the Pope. For much of the last 10 years or so, psychics have weighed in on when they believed the Pope would pass on. In the past 3 to 5 years, such predictions have reached a fever pitch. Some psychics try not to get into predictions of specific dates for famous deaths, knowing it to be a foolhardy task. Others dare to use the Pope as the cornerstone of their theories and predictions and are surely reeling today to take in all the news and apply it, liberally, to their bodies of work.

In the hours that follow the death of Pope John Paul II, we look at the psychics who claimed to know how and when he would pass and how they fared, the infamous appearance of Father Andrew Wingate on Friday's Coast to Coast AM, the coverage of the passing of the Pope and what to expect, as well as some thoughts from Joe Vee regarding the Papacy and Malachy's Prophecy.

Our old friend and keeper of the C2C psychic scorecard, Simon Aspinall of True or False replied to our requests for information on how the various C2C prognosticators foresaw the Pope's demise.

Binnall, most of them have stopped predicting the Popes death as they have got it wrong so many times. There are still a few who were nuts enough to have made predictions though.....

Joseph Jacobs said in January that he feels the Pope wants to retire or travel. In September 2004 he said nothing serious will happen to the Pope.

John Hogue in November 2003 said the Pope would die on the solar eclipse that month.

Hans King said 2005 would be the last year for the Pope. He said he might not die but he won't be able to carry out his duties.

Sean David Morton said the Pope would die in February 2001.

George Noory, perhaps afraid to "jump the gun" or go overboard, had more subdued coverage of the Pope's failing health on Friday. Insisting he had John Hogue and Kathleen Keating on "stand-by only", Noory instead brought out Fr. Andrew Wingate for the first hour of the show.

Wingate has appeared on C2C approximately 6 times, throughout each appearance weaving a story of the impending Armageddon. He recently appeared earlier this month, March 16th, to talk about the Pope specifically and the role he plays in this Armageddon "vision", which Wingate claims to have received from Heaven directly. Quote from Aspinall's True or False website, Wingate said "The Pope will go through his illness and then will be cured. He will never step down. He will go into exile for about 8 months and then will be declared dead by the church. The church will say he is dead and that his body is so badly mutilated that they can't show him in an open coffin. Then they will re-elect a new Pope. The election will be done by fax."

In response to the news of the quickly failing health of the Pope, Wingate was brought into C2C to respond on April 1st. This appearance and the events of the next day are already sending shockwaves throughout Coastdom and appear to be sending Fr. Wingate to the realm of Nancy Lieder for blatantly wrong predictions on Coast.

Noory repeatedly hammered home Wingate's predictions that the Pope would not die, including these soundbites from Wingate's 4.1.5 First Hour Appearance :

George Noory : "Alright, so you are standing by that."

George Noory : "Alright, so what you're saying. And I want to make this perfectly clear for everyone listening. You are saying that this Pope will not die over this currect crisis."

Fr.Wingate : "That's everything I understand."

Fr.Wingate : "Well, I have been telling everyone who keeps saying, "well, what if he's died." I tell em, I said, ' It's not even in the cards for me. I have not even considered it.' "

George Noory : "Alright, are you going to stand by the prophecy that you stated on March 16th on this program where you said, again, 'the Pope would be cured of a serious illness and then shortly after he will go into exile.' If this Pope survives this ordeal and comes out of this, are you saying to me, now, that this is the beginning of that prophecy you talked about on March 16th ?"

Fr.Wingate : "Yes, but the going into exile is not a real soon event."

Fr.Wingate : "For one thing, myself included with so many others have been following so many other things that lead to this to where, if he does die, I actually have to sit back and re-evaluated many things."

Noory never did bring out Kathleen Keating or John Hogue. In some ways, Noory was cheated by the news breaking over the weekend and, most likely, would have put together a Coastie-worthy edition of C2C in reaction to John Paul's passing. I would not be surprised to see Monday's guest Catherine Austin Fitts be bumped in favor of a special episode dealing with this news or Hugo de Garis on Wednesday, when the funeral is purported to be held during C2C's normal hours on air.

With the quickness in choosing a new Pope and the sheer odds against success, don't expect too many C2C psychics to weigh in on who the new Pope will be. Noory should have Kathleen Keating, John Hogue, and, hopefully, Fr.Andew Wingate on Monday for a special blockbuster edition of Coast. Don't be surprised if Sean David Morton or Sylvia Browne somehow show up as well.

From Joe Vee's "The Papacy and Malachy's Prophecy" :

The papacy is often much-ado with esoterica; the source of countless charges of conspiracy, manipulation, and cover-up, the Vatican has always been a favorite proving ground of enthusiasts and fanatics alike, and let us not forget to conclude a fair crop of end-time prognosticators as well. Although every prophet stands the chance of running the full gamut of the anti-christ claiming Peter's throne, the fall of the Mother Church, a great tribulation and persecution, and a few more rather outlandish fantasies I will not go into here, one invariably comes to the legendary Prophecy of Saint Malachy.

Doubtless, there is much to be written over the various factions readying themselves to take power when this present pontiff dies. Inside the Vatican lurks various groups all with their appointed leader whom they desire to place upon the throne of Peter.

The passing of a Pope and the choice of a new one is a practice that occurs only a handful of times in each person's lifetime. For this author, it will be my first witnessing of such an event. As a website dealing with geopolitics, conspiracy, theology, we hope to provide quality coverage of the ensuing intrigue which will surely arise.