Lazily Looking for Holmes: Musings on the Eras, Cycles and Gateways of the Fantastic.

2007, like most years, had its fair share of UFO related events, and strange phenomena. There was the National Press Club Conference on UFOs, the mysterious Comet Holmes magnification, the release of (some of) France and Britain’s government UFO files, and of course, the ‘drones’ smackdown and CARET hootenanny. It was the 60th Anniversary of the Roswell event, which naturally gained a lot of press and reflection. But, 2007 also marks a decade’s passing of one of the hottest, outrageous, and wackiest UFO and paranormal years to date.

I’m not sure what it is about the decade mark that makes an event or memory seem extra poignant; perhaps there’s some sense that it’s really rooted in the unreachable Past. Whatever it is, as 2007 was drawing to a close, and even now, as the New Year is underway, I have been feeling all reminiscent and nostalgic about 1997. So, recalling the majestic spectacle of that year’s Comet Hale-Bopp, and armed with directions and binoculars, a couple months ago my son and I recently tried to find Comet Holmes.

My son was a just a toddler when Hale-Bopp swept our skies, and of course he has no memory of it. I told him about my first sighting of the comet, that I naively had not even attempted to look for it casually, believing it would be a matter of driving away from the city into the desert or mountains to get the necessary black sky effect.

I told him how I was then completely struck when just glancing up, standing outside our apartment talking to a friend in the evening—and Hale-Bopp was very there, fixed, profoundly stereotypical in its cometness, requiring no binoculars, no star guide, no guessing. 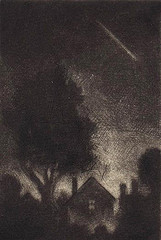 Of course I was enchanted and freaking out—I was a part of the old Farsight chat room of remote viewing’s enfant terrible Courtney Brown. Most will recall Brown’s now-infamous announcement on Art Bell, regarding the ET-filled, metal spaceship four times the size of the earth, trailing Hale-Bopp.

This outlandish news was on the heels of so much, too. There was the Sean David Morton-touted Alien Interview, in which a Muppetesque Gray collapses in a coughing fit. And of course, the Phoenix Lights, and Heaven’s Gate. Crop circles had their fancy debutante ball, coming into their own—big girls with their sacred-geometrical complex features. Conspiracy and alternative theories of all kind abounded in internet forums, and television specials featuring aliens, abduction phenomena, and all kinds of mysteries abounded. A wave of mass UFO sightings was also at hand.

1997 was ripe with weirdness and perhaps a sort of pivot point in the UFO and paranormal realm. The internet was obviously not new, but it may have been the first year it was accessed regularly and casually by a certain critical mass, which, for the first time, lent happenings of high-strangeness a grandiose interactive quality, and allowed participation. 1997 was a gateway of sorts, offering a magical combination of anticipation and Mystery.

Interestingly, exactly 50 years prior, the year 1947 saw a similar gateway scenario: Kenneth Arnold’s famous sighting ushered in the modern UFO era, while perhaps the death of Aleister Crowley drew a curtain on the classical occult revival, and along with it, outdated, pre-modern, stale Victorian and Edwardian notions. Also, in 1947, the Cold War began. There it all is again, that sense of anticipation and Mystery.

It is possible to maintain this 50 year ‘gateway’ idea during the last couple centuries. 1897 saw the Klondike gold rush, the word computer is first used, Dracula is published, and of course, there was the great UFO wave of mystery airships. Previously, 50 years prior to that, in 1847, the Gold Rush and delirious movement to the Far West begins, the women’s rights movement is founded, Spiritualism takes root, and abolition issues get flaming hot, and set the stage for slicing the county in half.

Curiously, the set of dynamics between 1847 and 1897, mirror their 20th century counterparts. 1847, like 1947, seemed to hold major social and cultural changes. 1897 and 1997, respectively, reflected those major changes in similar, supportive dynamics of their larger counterparts.

For example, the smaller Klondike Gold Rush obviously held the same idea of personal quest and self-created prosperity and general meaning (the great American Dream) of the original Gold Rush. Likewise, the Phoenix Lights can be seen as a single supportive event within the larger, almost archetypal framework of meaning that surrounds and been injected in Arnold’s sighting, and Roswell.

There’s a sense of reflexivity, of holographic meaning; powerful self-references that call out for reflection and decipherment. As these events emerge, our collective psychic scribbles seem to circle some of them furiously, underline others, note or erase a few, and draw exclamation points and happy faces.

For a decade, it seems we have been able to render our scribblings more easily and brilliantly than ever before, with the internet as a forum. Perhaps I have been blinded a bit by it all, and my starry vision is clouded; alas, we never did find the hugely glowing Holmes.